Who knew that flowers, could be life-changing for a family which almost fell apart? It certainly did for Hazel- a social entrepreneur. Life took a turn when she realised that flowers have the potential to light up one’s life in the most beautiful ways.

Family struggles that shaped her resilience 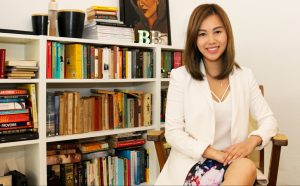 Hazel grew up in a low income single parent family with a brother and partially disabled sister. Her mom worked tirelessly to make ends meet and it was not an easy childhood for them.

Hazel took on multiple jobs while studying to support herself. Hard work paid off; she managed to work in MNCs such as SIA and Prudential. During her time in Prudential, she received multiple awards including the prestigious Million Dollar Round Table, and quickly rose to a leadership position.

She was leading an affluent life, yet felt like something was amiss. Deep down, she felt incomplete. A lot of time was spent on her career at the expense of relationships, and she drifted apart from her family.

“While money issues had been solved, new problems crept in which made me reflect and realign my life goals.” – Hazel

From helping her sister to the birth of BloomBack

Hazel’s sister, Faith was born hearing impaired and was diagnosed with Retinitis Pigmentosa 12 years ago – a degenerative disorder of the eyes that causes tunnel vision. Her doctor warned that there is a possibility she would eventually go blind. This was a huge blow to her and she started worrying about how her life was going to change. She was having difficulties finding jobs due to her disabilities. On top of facing the harsh reality of a broken marriage. Overwhelmed by emotions, Faith fell into depression.

In an attempt to cheer Faith up, Hazel brought her along to her friend’s wedding and decided to bring back all the flowers as Faith was in awe of them. Together, they repackaged the flowers into bouquets and gave them away to lonely elderly residents to bring cheers to them. 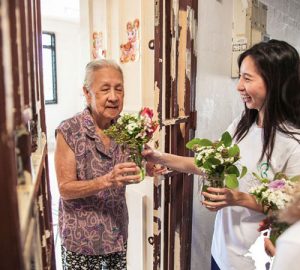 The priceless smiles on the recipients’ faces made them realise that a simple act of kindness can go a long way. Faith then decided to pursue floristry seeing how she has benefited from the floral therapy and making a positive difference. She believed that this skillset can help impact more lives instead of dwelling on her unfortunate circumstances. The experience also struck a chord with Hazel. She was determined to help the other marginalised women out there struggling in silence, just like her single mother and sister. She realised that pursuing something close to her heart is more fulfilling than simply chasing after money.

Meaningful gifts handcrafted by single mother and daughter with disabilities 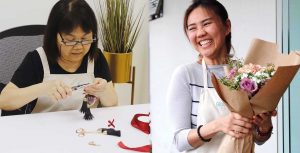 What started as a simple activity involving flowers evolved into a social enterprise in 2017. Bloomback offers handcrafted eco-friendly gifts made with long-lasting preserved flowers commercially. Creating a movement where flowers and ornamental plants are used to create love and happiness. Since its incorporation, Bloomback has gained considerable traction in the Singapore market. Backed up with its online presence, community and welfare efforts. 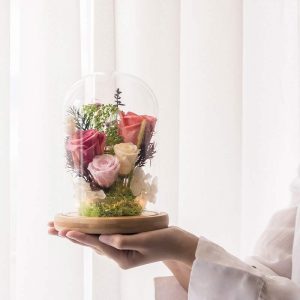 Faith and her mom, officially joined BloomBack as beneficiary floral artisans after undergoing a holistic floristry training. Today, all of BloomBack’s preserved flower gifts are lovingly handcrafted by them, together with like-minded team members who are inspired by their story and driven to make a difference in people’s lives. 50% of the team is made up of marginalised individuals including Faith’s brother, Alan, who used to be an ex-offender. He was given a second chance in life by BloomBack and is now an operations assistant at BloomBack and plays a crucial role in ensuring high quality standards for all customers’ orders before they are sent out. 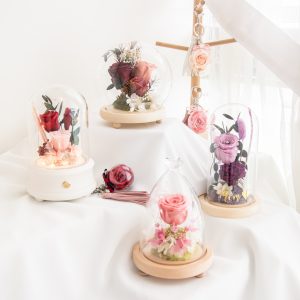 Create a social impact through a simple act of gifting

Staying true to its mission, BloomBack will continue to serve as the bridge between the gifter and recipient. By providing a convenient, fun and meaningful platform with the aim to let anyone experience joy through conscious gifting. Hazel and her team are always on the lookout for innovative ideas to enhance customers’ shopping experience as they are committed to help them deliver heartfelt emotions through impactful gifts that make a difference.

BloomBack believes that anyone can create a social impact through a simple act of gifting. Every purchase you make at BloomBack creates a ripple effect in doing good build an inclusive community. This helps to empower individuals through their sustainable social cause.